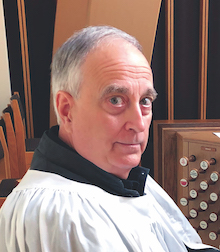 Jefferson McConnaughey, a native of Virginia, has been playing the organ in churches for the past 54 years. He was graduated cum laude from Mars Hill College, Mars Hill, North Carolina, in 1974 with a Bachelor of Music in Performance degree, majoring in organ. While at Mars Hill, Mr. McConnaughey studied organ with Donna N. Robertson and Dr. Marilyn Keiser. He served as an Assistant Organist and Choirmaster for Evensong at All Saints Episcopal Church in Atlanta, Georgia and, for 15 years, was organist for Northside Drive Baptist Church. He moved to Columbus, Ohio with his wife, Kathryn, after retiring. In addition to musical pursuits, Jeff is also a graduate of the University of North Carolina’s School of Law, licensed in Georgia and North Carolina, and admitted to the bar in 1978. He practiced law until his retirement in 2018.